Insert compatible with Teotihuacan® and the Late Preclassic Period® expansion. The design provides both efficient storage and improved game play. The trays can be utilised during the game, and they greatly aid set-up and clear-away times. The rules and boards act as a lid on top of the trays.

The insert is arranged in two layers.

The second expansion, Shadow of Xitle® can also be added to the insert trays. 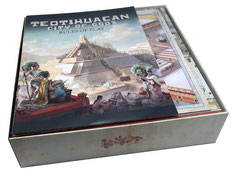 The main game board placed first on top of the insert trays acting as a lid. Next goes the expansion board, followed lastly by the two rule books. Note that when fully loaded the box has a very small amount of lid-lift, which is between 1 and 2 mm.

As mentioned above the insert also works well with the recently released Shadow of Xitle® expansion. You need to move a few components around to make room for the additional technology and starting tiles. Here you can see the three trays effected in the game box. 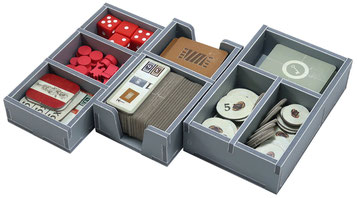 The solo play teotibot tokens in Tray 2a should be moved the red player piece tray, and placed under the large player tokens. The royal tiles  are moved from Tray 4b to the vacant slot in Tray 2a and replaced by the new technology tiles. The additional starting tiles can be placed vertically with the original starting tiles i n Tray 4b, with one of them having to be stored flat as shown.